In the transformers the Director has both objectified and fetishized the female in order to show the males attraction towards her. Michael Bay has used phallic symbols and the Male Gaze to show objectification in this clip.

The director (Michael Bay) has used  the car to show power, to which we can apply Freudian theory. He has applied Freud to show the car as a phallic symbol, as it is masculine and chunky (representing the male) and the engine is seen as his penis. In the scene, the female is leaning over the car with the bonnet up, implying that she is 'undressing' the car.

Bay uses the male gaze by cutting the females body with the camera angles in order to objectify her to the audience. He shows her bellybutton, which is seen as a vaginal porthole -when the male looks directly at her bellybutton the sexual context intensifies - her breasts, and her toned stomach so that she is fetishized, which exaggerates the males wants to have sex with her.

Throughout the scene the dialogue is used as a reference to sex. Although most of the words are mechanical jargon, all the aspects of the film come together to make them seem dirty (camera angles, character reactions, digetic and non-digetic sound etc.) The female talks about the engine, and then refers to it as 'pretty impressive.' As the engine is the males phallus, this makes the female seem promiscuous and sexual. She continues this further by saying 'it squirts the fuel in so you can go faster' to which he responds 'I'd like to go fast' whilst obliviously lusting over her body.

In the clip the female is further seen as promiscuous and shows attraction towards the male through her movements. She gently thrusts her hips whilst examining the car, which is portrayed as sexual. Her costume has been used to draw attention to her body parts and further demonstrate the male gaze. In terms of mise en scene, the females shirt is a low cut crop top which emphasizes her assets and gives her the 'sexy female' characteristic. She is also wearing low cut jeans, with the white belt contrasting against the colour of her skin and jeans in order to draw attention to her assets. The actress has large lips, which are an indexical signifier of oral sex, and are also seen as a vaginal porthole, her lipstick further inviting this theory. She is also wearing large hooped earrings, which are reminiscent of a sex toy and are again also seen as a vaginal porthole, and has smoky eyes which was popular at the time for being sexy. Brunettes are typically stereotyped as being strong and sassy; all of these aspects of her appearance add to the fetishization within the scene and the male and females attraction to each other.

Michael Bay uses voyeuristic shots of the female in order to induce scopophillia, which is when a person receives pleasure from watching somebody engaged in a sexual activity. Although the female is not actually involved in any sexual activity in this scene, the camera looks at her in a scopophillic way by focusing on the different parts of her body. It also does this when she is shaking the engine, as it is seen as a phallic object, and she moves her body as she would in a sexual act. The female bends over and begins touching the mans 'sexual identity,' vigorously man handling the engine.

The mise en scene is used within the scene to additionally fetishize the female character. For example, the sunset in the background accentuates her sweat. Her bellybutton is sweaty, which people could believe is there due to the hot day and the exertion of walking and fixing the car. Sweat is often seen as an indexical signifier, so we could relate it to exertion from sex/sexual activities, pressure of a situation, from exercise etc. However, in this context we see it as a sexual feature of lust.

In the clip both the audience and the male character are shown the male gaze which objectifies her and gives both 'sneaky peeks' By doing this it leads people to believe that it is socially acceptable to fetishize women and view them in a voyeuristic way. By doing this society could be affected, as it is believed that men are allowed to perceive woman in this sexual way. This could be seen as harmful, as it means the media are warping our society and have control over us. However, by objectifying women it has lead to a post-feminist society, where women can feel confident in their bodies and use them for themselves, not for the pleasure of men. It has meant that equality between men and women is natural and acceptable. 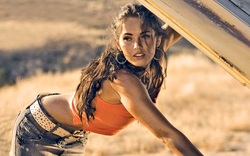 In this clip, the female is seen as dominant. She is intelligent, as she knows about cars, which are stereotypically a male attribute. This leads the audience to think she is experienced with sex, as the car and engine is a phallic symbol. She has traits of a strong female, as she is tough and has knowledge in 'manly' subjects. Although she is objectified and fetishized throughout the piece, she is very feminine and confident with her sexuality, making her a post-feminist character as her clothing and actions are as they are out of her own choice, not in order to please men. This makes her seem in control and more independent.
I believe that this type of filmmaking is acceptable. Although some people think that it is exploiting women, I believe that it is acceptable to show women like this, as it demonstrates the 'independent woman.' This clip portrays the character as confident, and allows the audience to see that she uses her body and beauty to her own advantage, not to the advantage of men. As we can see, the man is lusting over her, therefore she has the power. I think that this is a good way to show women in the media as they break the post feminism stereotype.
Powered by