There are three main filming techniques used in the film and television industries. These techniques make the filming more dynamic, make the piece look professional when the final product is completed, and  each provide continuity within the piece, causing it to flow smoothly once finished.

Matching on Action
The match on action technique is the continuation of an action throughout an angle change, which enables the piece to have a smooth transition from one perspective to another. The action could be as simple as a character taking a few steps forward, first showing us a wide shot of the character moving forwards, and then a close up of his feet moving towards the camera, or it could be more complex, for example a character swinging a blade over another's head. It would start with a shot of the executioners face, and the movement of him raising the axe above the others head (who we would see the back of) then switching to a shot of the executioners back and the other characters face as he brings the axe down on his head. Although the perspective will have changed, the movement should flow to make the action continuous and fluent.

Example of Match on Action Shot; 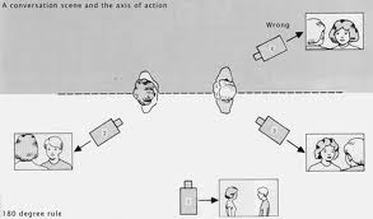 curlypanda.blogspot.com
The 180 degree rule
This rule refers to an invisible line being drawn between or around two or more
characters. Although this line isn't visible, the camera must not cross the
line. The angle can be changed but it must stay on the right side of the
characters, who should stay in the same place.  This provides the audience with
a sense of perspective, and if the camera were to cross the line the perspective
would be ruined, causing the characters to appear as if they have moved
completely. The purpose of this technique is to give the audience a sense of stability.

Shot/Reverse Shot
This technique is used to show a conversation between two people. The two characters are usually sat or stood opposite each other, and the camera will show a shot of one character looking at the other, and then reversed with the other character. This is used in the film and television industry to create continuity and allow the audience to easily follow the conversation.